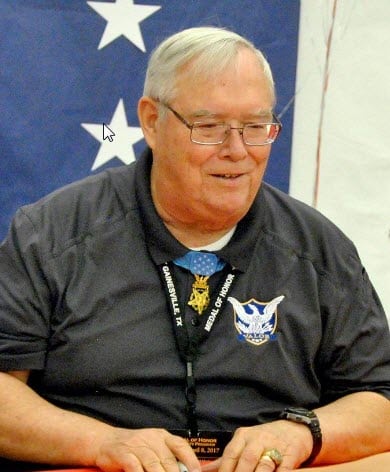 For conspicuous gallantry and intrepidity in action at the risk of his life above and beyond the call of duty. While conducting combat operations against a hostile force, Sp5c. Hagemeister’s platoon suddenly came under heavy attack from 3 sides by an enemy force occupying well concealed, fortified positions and supported by machine guns and mortars. Seeing 2 of his comrades seriously wounded in the initial action, Sp5c. Hagemeister unhesitatingly and with total disregard for his safety, raced through the deadly hail of enemy fire to provide them medical aid. Upon learning that the platoon leader and several other soldiers also had been wounded, Sp5c. Hagemeister continued to brave the withering enemy fire and crawled forward to render lifesaving treatment and to offer words of encouragement. Attempting to evacuate the seriously wounded soldiers, Sp5c. Hagemeister was taken under fire at close range by an enemy sniper. Realizing that the lives of his fellow soldiers depended on his actions, Sp5c. Hagemeister seized a rifle from a fallen comrade, killed the sniper, 3 other enemy soldiers who were attempting to encircle his position and silenced an enemy machine gun that covered the area with deadly fire. Unable to remove the wounded to a less exposed location and aware of the enemy’s efforts to isolate his unit, he dashed through the fusillade of fire to secure help from a nearby platoon. Returning with help, he placed men in positions to cover his advance as he moved to evacuate the wounded forward of his location. These efforts successfully completed, he then moved to the other flank and evacuated additional wounded men despite the fact that his every move drew fire from the enemy. Sp5c. Hagemeister’s repeated heroic and selfless actions at the risk of his life saved the lives of many of his comrades and inspired their actions in repelling the enemy assault. Sp5c. Hagemeister’s indomitable courage was in the highest traditions of the U.S. Armed Forces and reflect great credit upon himself.