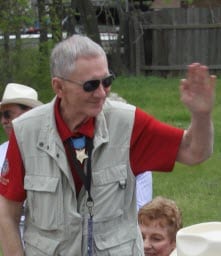 For conspicuous gallantry and intrepidity at the risk of his life above and beyond the call of duty while serving as Commanding Officer, Company E, in action against enemy forces. Company E launched a determined assault on the heavily fortified village of Dai Do, which had been seized by the enemy on the preceding evening isolating a marine company from the remainder of the battalion. Skillfully employing screening agents, Capt. Livingston maneuvered his men to assault positions across 500 meters of dangerous open rice paddy while under intense enemy fire. Ignoring hostile rounds impacting near him, he fearlessly led his men in a savage assault against enemy emplacements within the village. While adjusting supporting arms fire, Capt. Livingston moved to the points of heaviest resistance, shouting words of encouragement to his marines, directing their fire, and spurring the dwindling momentum of the attack on repeated occasions. Although twice painfully wounded by grenade fragments, he refused medical treatment and courageously led his men in the destruction of over 100 mutually supporting bunkers, driving the remaining enemy from their positions, and relieving the pressure on the stranded marine company. As the 2 companies consolidated positions and evacuated casualties, a third company passed through the friendly lines launching an assault on the adjacent village of Dinh To, only to be halted by a furious counterattack of an enemy battalion. Swiftly assessing the situation and disregarding the heavy volume of enemy fire, Capt. Livingston boldly maneuvered the remaining effective men of his company forward, joined forces with the heavily engaged marines, and halted the enemy’s counterattack Wounded a third time and unable to walk, he steadfastly remained in the dangerously exposed area, deploying his men to more tenable positions and supervising the evacuation of casualties. Only when assured of the safety of his men did he allow himself to be evacuated. Capt. Livingston’s gallant actions uphold the highest traditions of the Marine Corps and the U.S. Naval Service.