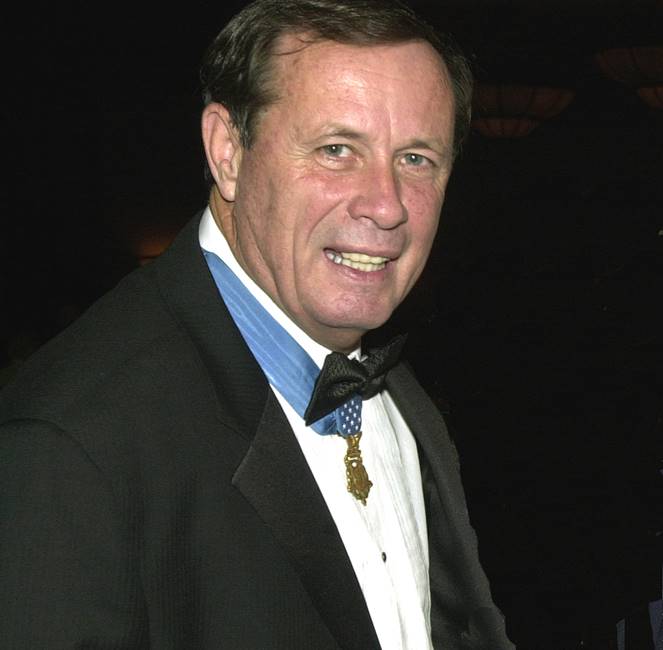 For conspicuous gallantry and intrepidity in action at the risk of his life above and beyond the call of duty. S/Sgt. Bacon distinguished himself while serving as a squad leader with the 1st Platoon, Company B, during an operation west of Tam Ky. When Company B came under fire from an enemy bunker line to the front, S/Sgt. Bacon quickly organized his men and led them forward in an assault. He advanced on a hostile bunker and destroyed it with grenades. As he did so, several fellow soldiers including the 1st Platoon leader, were struck by machine gun fire and fell wounded in an exposed position forward of the rest of the platoon. S/Sgt. Bacon immediately assumed command of the platoon and assaulted the hostile gun position, finally killing the enemy gun crew in a single-handed effort. When the 3d Platoon moved to S/Sgt. Bacon’s location, its leader was also wounded. Without hesitation S/Sgt. Bacon took charge of the additional platoon and continued the fight. In the ensuing action he personally killed 4 more enemy soldiers and silenced an antitank weapon. Under his leadership and example, the members of both platoons accepted his authority without question. Continuing to ignore the intense hostile fire, he climbed up on the exposed deck of a tank and directed fire into the enemy position while several wounded men were evacuated. As a result of S/Sgt. Bacon’s extraordinary efforts, his company was able to move forward, eliminate the enemy positions, and rescue the men trapped to the front. S/Sgt. Bacon’s bravery at the risk of his life was in the highest traditions of the military service and reflects great credit upon himself, his unit, and the U.S. Army.