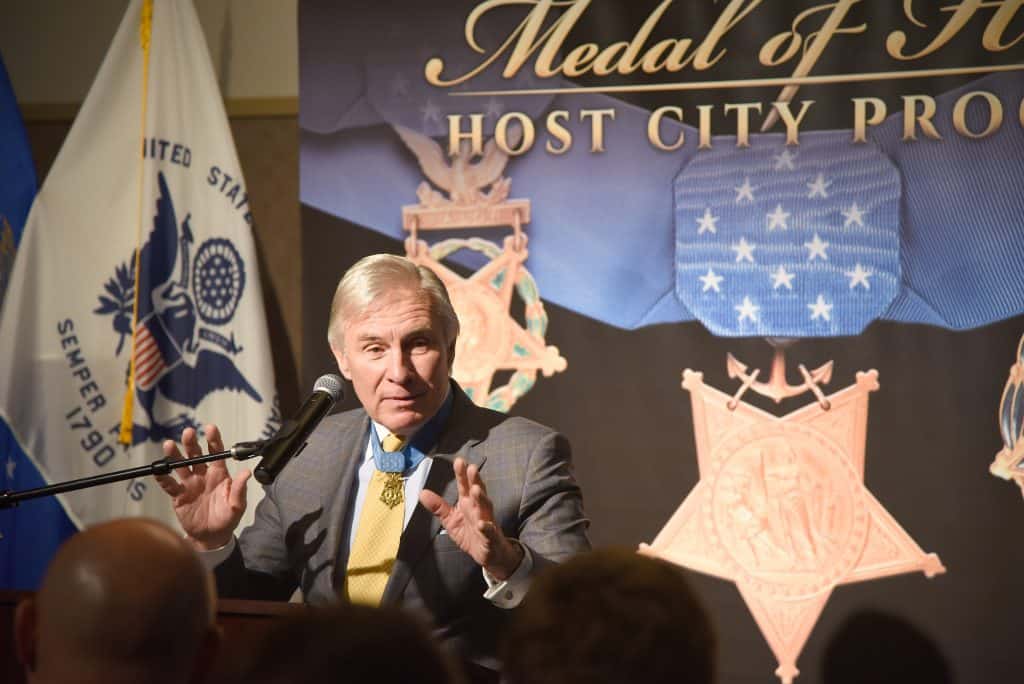 For conspicuous gallantry and intrepidity in action at the risk of his life above and beyond the call of duty. Capt. Bucha distinguished himself while serving as commanding officer, Company D, on a reconnaissance-in-force mission against enemy forces near Phuoc Vinh, The company was inserted by helicopter into the suspected enemy stronghold to locate and destroy the enemy. During this period Capt. Bucha aggressively and courageously led his men in the destruction of enemy fortifications and base areas and eliminated scattered resistance impeding the advance of the company. On 18 March while advancing to contact, the lead elements of the company became engaged by the heavy automatic weapon, heavy machine gun, rocket propelled grenade, Claymore mine and small-arms fire of an estimated battalion-size force. Capt. Bucha, with complete disregard for his safety, moved to the threatened area to direct the defense and ordered reinforcements to the aid of the lead element. Seeing that his men were pinned down by heavy machine gun fire from a concealed bunker located some 40 meters to the front of the positions, Capt. Bucha crawled through the hail of fire to single-handedly destroy the bunker with grenades. During this heroic action Capt. Bucha received a painful shrapnel wound. Returning to the perimeter, he observed that his unit could not hold its positions and repel the human wave assaults launched by the determined enemy. Capt. Bucha ordered the withdrawal of the unit elements and covered the withdrawal to positions of a company perimeter from which he could direct fire upon the charging enemy. When 1 friendly element retrieving casualties was ambushed and cut off from the perimeter, Capt. Bucha ordered them to feign death and he directed artillery fire around them. During the night Capt. Bucha moved throughout the position, distributing ammunition, providing encouragement and insuring the integrity of the defense. He directed artillery, helicopter gunship and Air Force gunship fire on the enemy strong points and attacking forces, marking the positions with smoke grenades. Using flashlights in complete view of enemy snipers, he directed the medical evacuation of 3 air-ambulance loads of seriously wounded personnel and the helicopter supply of his company. At daybreak Capt. Bucha led a rescue party to recover the dead and wounded members of the ambushed element. During the period of intensive combat, Capt. Bucha, by his extraordinary heroism, inspirational example, outstanding leadership and professional competence, led his company in the decimation of a superior enemy force which left 156 dead on the battlefield. His bravery and gallantry at the risk of his life are in the highest traditions of the military service, Capt. Bucha has reflected great credit on himself, his unit, and the U.S. Army.