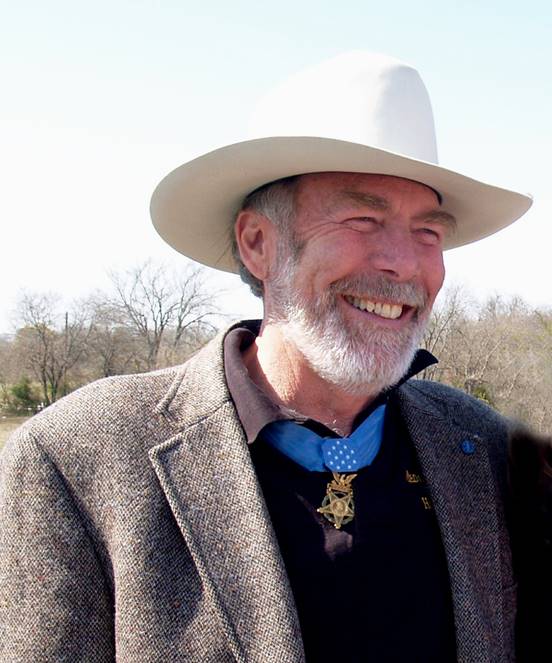 For conspicuous gallantry and intrepidity in action at the risk of his life above and beyond the call of duty. S/Sgt. Dix distinguished himself by exceptional heroism while serving as a unit adviser. Two heavily armed Viet Cong battalions attacked the Province capital city of Chau Phu resulting in the complete breakdown and fragmentation of the defenses of the city. S/Sgt. Dix, with a patrol of Vietnamese soldiers, was recalled to assist in the defense of Chau Phu. Learning that a nurse was trapped in a house near the center of the city, S/Sgt. Dix organized a relief force, successfully rescued the nurse, and returned her to the safety of the Tactical Operations Center. Being informed of other trapped civilians within the city, S/Sgt. Dix voluntarily led another force to rescue 8 civilian employees located in a building which was under heavy mortar and small-arms fire. S/Sgt. Dix then returned to the center of the city. Upon approaching a building, he was subjected to intense automatic rifle and machine gun fire from an unknown number of Viet Cong. He personally assaulted the building, killing 6 Viet Cong, and rescuing 2 Filipinos. The following day S/Sgt. Dix, still on his own volition, assembled a 20-man force and though under intense enemy fire cleared the Viet Cong out of the hotel, theater, and other adjacent buildings within the city. During this portion of the attack, Army Republic of Vietnam soldiers inspired by the heroism and success of S/Sgt. Dix, rallied and commenced firing upon the Viet Cong. S/Sgt. Dix captured 20 prisoners, including a high ranking Viet Cong official. He then attacked enemy troops who had entered the residence of the Deputy Province Chief and was successful in rescuing the official’s wife and children. S/Sgt. Dix’s personal heroic actions resulted in 14 confirmed Viet Cong killed in action and possibly 25 more, the capture of 20 prisoners, 15 weapons, and the rescue of the 14 United States and free world civilians. The heroism of S/Sgt. Dix was in the highest tradition and reflects great credit upon the U.S. Army.