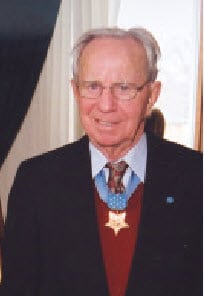 For conspicuous heroism and courage above and beyond the call of duty as leader of a marine fighter squadron in aerial combat with enemy Japanese forces in the Solomon Islands area. Leading his squadron repeatedly in daring and aggressive raids against Japanese aerial forces, vastly superior in numbers, Maj. Galer availed himself of every favorable attack opportunity, individually shooting down 11 enemy bomber and fighter aircraft over a period of 29 days. Though suffering the extreme physical strain attendant upon protracted fighter operations at an altitude above 25,000 feet, the squadron under his zealous and inspiring leadership shot down a total of 27 Japanese planes. His superb airmanship, his outstanding skill and personal valor reflect great credit upon Maj. Galer’s gallant fighting spirit and upon the U.S. Naval Service.