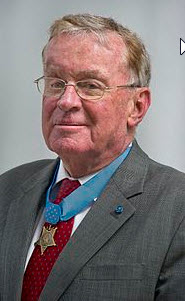 For conspicuous gallantry and intrepidity at the risk of his life above and beyond the call of duty in the afternoon while serving as commander of River Assault Division 152 during combat operations against enemy aggressor forces. Lt. Comdr. (then Lt.) Kelley was in charge of a column of 8 river assault craft which were extracting 1 company of U.S. Army infantry troops on the east bank of the Ong Muong Canal in Kien Hoa province, when 1 of the armored troop carriers reported a mechanical failure of a loading ramp. At approximately the same time, Viet Cong forces opened fire from the opposite bank of the canal. After issuing orders for the crippled troop carrier to raise its ramp manually, and for the remaining boats to form a protective cordon around the disabled craft, Lt. Comdr. Kelley realizing the extreme danger to his column and its inability to clear the ambush site until the crippled unit was repaired, boldly maneuvered the monitor in which he was embarked to the exposed side of the protective cordon in direct line with the enemy’s fire, and ordered the monitor to commence firing. Suddenly, an enemy rocket scored a direct hit on the coxswain’s flat, the shell penetrating the thick armor plate, and the explosion spraying shrapnel in all directions. Sustaining serious head wounds from the blast, which hurled him to the deck of the monitor, Lt. Cmdr. Kelley disregarded his severe injuries and attempted to continue directing the other boats. Although unable to move from the deck or to speak clearly into the radio, he succeeded in relaying his commands through 1 of his men until the enemy attack was silenced and the boats were able to move to an area of safety. Lt. Comdr. Kelley’s brilliant leadership, bold initiative, and resolute determination served to inspire his men and provide the impetus needed to carry out the mission after he was medically evacuated by helicopter. His extraordinary courage under fire, and his selfless devotion to duty sustain and enhance the finest traditions of the U.S. Naval Service.