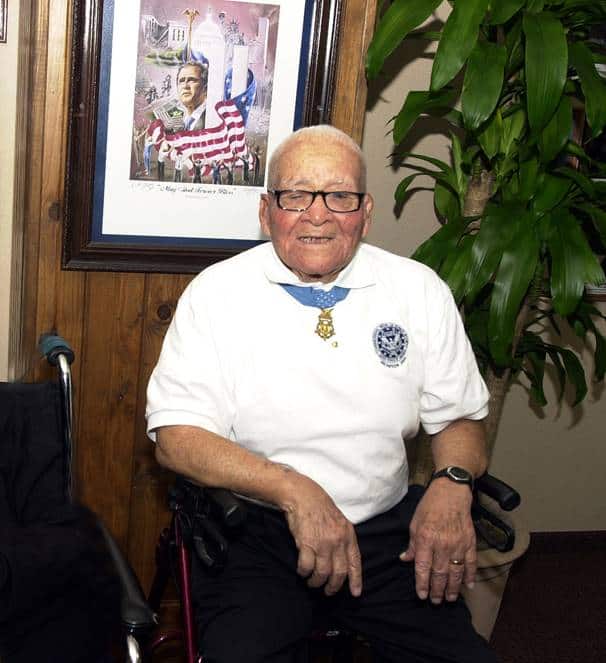 On his own initiative, he carried his heavy machinegun from Company K’s right flank to its left, in order to protect that flank which was in danger of being overrun by advancing enemy infantry supported by tanks. Occupying a shallow hole offering no protection above his waist, he cut down a group of 10 Germans. Ignoring enemy fire from an advancing tank, he held his position and cut down 25 more enemy infantry attempting to turn his flank. Glancing to his right, he saw a large number of infantry swarming in from the front. Although dazed and shaken from enemy artillery fire which had crashed into the ground only a few yards away, he realized that his position soon would be outflanked. Again, alone, he carried his machinegun to a position to the right rear of the sector; enemy tanks and infantry were forcing a withdrawal. Blown over backward by the concussion of enemy fire, he immediately reset his gun and continued his fire. Single-handed he held off the German horde until he was satisfied his company had effected its retirement. Again he loaded his gun on his back and in a hail of small arms fire he ran to a point where a few of his comrades were attempting to set up another defense against the onrushing enemy. He fired from this position until his ammunition was exhausted. Still carrying his gun, he fell back with his small group to Krinkelt. Sgt. Lopez’s gallantry and intrepidity, on seemingly suicidal missions in which he killed at least 100 of the enemy, were almost solely responsible for allowing Company K to avoid being enveloped, to withdraw successfully and to give other forces coming up in support time to build a line which repelled the enemy drive.