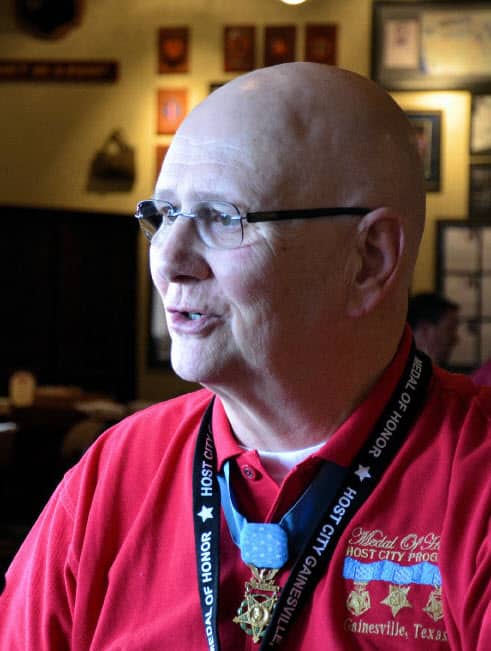 For conspicuous gallantry and intrepidity in action at the risk of his life above and beyond the call of duty. Sgt. Lynch (then Sp4c.) distinguished himself while serving as a radio telephone operator with Company D. While serving in the forward element on an operation near the village of My An, his unit became heavily engaged with a numerically superior enemy force. Quickly and accurately assessing the situation, Sgt. Lynch provided his commander with information which subsequently proved essential to the unit’s successful actions. Observing 3 wounded comrades Lying exposed to enemy fire, Sgt. Lynch dashed across 50 meters of open ground through a withering hail of enemy fire to administer aid. Reconnoitering a nearby trench for a covered position to protect the wounded from intense hostile fire, he killed 2 enemy soldiers at point blank range. With the trench cleared, he unhesitatingly returned to the fire-swept area 3 times to carry the wounded men to safety. When his company was forced to withdraw by the superior firepower of the enemy, Sgt. Lynch remained to aid his comrades at the risk of his life rather than abandon them. Alone, he defended his isolated position for 2 hours against the advancing enemy. Using only his rifle and a grenade, he stopped them just short of his trench, killing 5. Again, disregarding his safety in the face of withering hostile fire, he crossed 70 meters of exposed terrain 5 times to carry his wounded comrades to a more secure area. Once he had assured their comfort and safety, Sgt. Lynch located the counterattacking friendly company to assist in directing the attack and evacuating the 3 casualties. His gallantry at the risk of his life is in the highest traditions of the military service, Sgt. Lynch has reflected great credit on himself, the 12th Cavalry, and the U.S. Army.