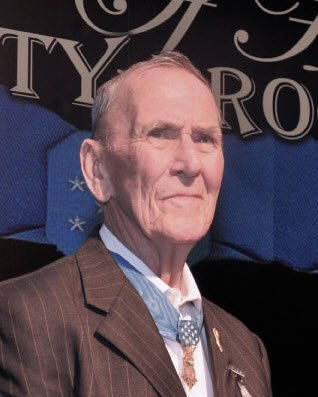 1st Sgt. McNerney distinguished himself when his unit was attacked by a North Vietnamese battalion near Polei Doc. Running through the hail of enemy fire to the area of heaviest contact, he was assisting in the development of a defensive perimeter when he encountered several enemy at close range. He killed the enemy but was painfully injured when blown from his feet by a grenade. In spite of this injury, he assaulted and destroyed an enemy machine gun position that had pinned down 5 of his comrades beyond the defensive line. Upon learning his commander and artillery forward observer had been killed, he assumed command of the company. He adjusted artillery fire to within 20 meters of the position in a daring measure to repulse enemy assaults. When the smoke grenades used to mark the position were gone, he moved into a nearby clearing to designate the location to friendly aircraft. In spite of enemy fire he remained exposed until he was certain the position was spotted and then climbed into a tree and tied the identification panel to its highest branches. Then he moved among his men readjusting their position, encouraging the defenders and checking the wounded. As the hostile assaults slackened, he began clearing a helicopter landing site to evacuate the wounded. When explosives were needed to remove large trees, he crawled outside the relative safety of his perimeter to collect demolition material from abandoned rucksacks. Moving through a fusillade of fire he returned with the explosives that were vital to the clearing of the landing zone. Disregarding the pain of his injury and refusing medical evacuation 1st Sgt. McNerney remained with his unit until the next day when the new commander arrived. First Sgt. McNerney’s outstanding heroism and leadership were inspirational to his comrades. His actions were in keeping with the highest traditions of the U.S. Army and reflect great credit upon himself and the Armed Forces of his country.