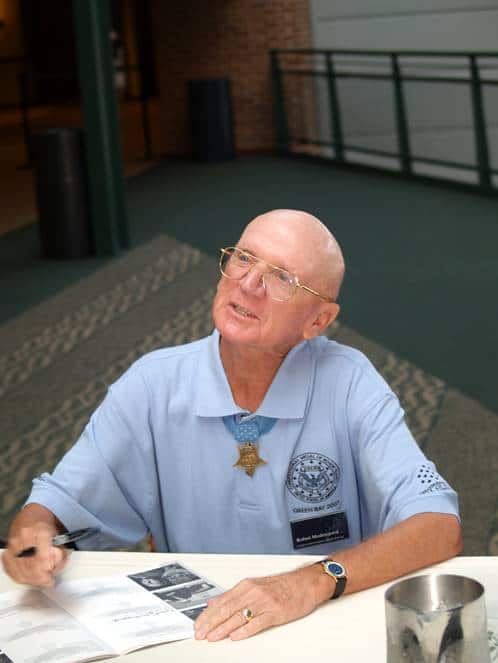 For conspicuous gallantry and intrepidity at the risk of his life above and beyond the call of duty. On 15 July, during Operation HASTINGS, Company K was landed in an enemy-infested jungle area to establish a blocking position at a major enemy trail network. Shortly after landing, the company encountered a reinforced enemy platoon in a well-organized, defensive position. Maj. Modrzejewski led his men in the successful seizure of the enemy redoubt, which contained large quantities of ammunition and supplies. That evening, a numerically superior enemy force counterattacked in an effort to retake the vital supply area, thus setting the pattern of activity for the next 2 1/2 days. In the first series of attacks, the enemy assaulted repeatedly in overwhelming numbers but each time was repulsed by the gallant marines. The second night, the enemy struck in battalion strength, and Maj. Modrzejewski was wounded in this intensive action which was fought at close quarters. Although exposed to enemy fire, and despite his painful wounds, he crawled 200 meters to provide critically needed ammunition to an exposed element of his command and was constantly present wherever the fighting was heaviest, despite numerous casualties, a dwindling supply of ammunition and the knowledge that they were surrounded, he skillfully directed artillery fire to within a few meter* of his position and courageously inspired the efforts of his company in repelling the aggressive enemy attack. On 18 July, Company K was attacked by a regimental-size enemy force. Although his unit was vastly outnumbered and weakened by the previous fighting, Maj. Modrzejewski reorganized his men and calmly moved among them to encourage and direct their efforts to heroic limits as they fought to overcome the vicious enemy onslaught. Again he called in air and artillery strikes at close range with devastating effect on the enemy, which together with the bold and determined fighting of the men of Company K, repulsed the fanatical attack of the larger North Vietnamese force. His unparalleled personal heroism and indomitable leadership inspired his men to a significant victory over the enemy force and reflected great credit upon himself, the Marine Corps, and the U.S. Naval Service.