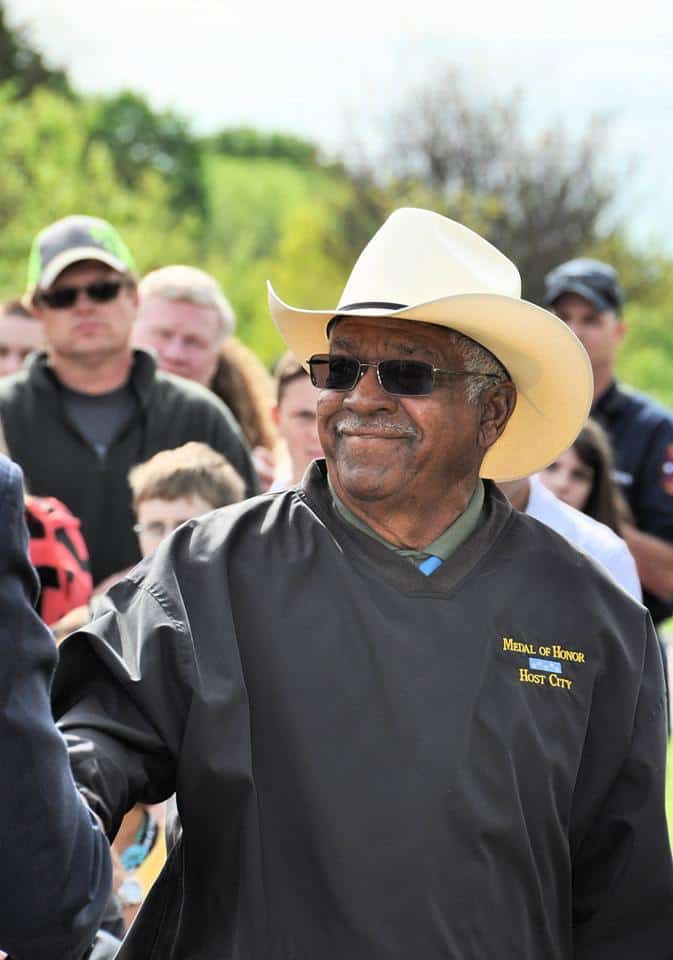 For conspicuous gallantry and intrepidity at the risk of his life above and beyond the call of duty:

Staff Sergeant Melvin Morris distinguished himself by acts of gallantry and intrepidity above and beyond the call of duty while serving as Commander of a Strike Force drawn from Company D, 5th Special Forces Group (Airborne), 1st Special Forces, during combat operations against an armed enemy in the vicinity of Chi Lang, Republic of Vietnam on September 17, 1969.
On that afternoon, Staff Sergeant Morris’ affiliated companies encountered an extensive enemy mine field and were subsequently engaged by a hostile force. Staff Sergeant Morris learned by radio that a fellow team commander had been killed near an enemy bunker and he immediately reorganized his men into an effective assault posture before advancing forward and splitting off with two men to recover the team commander’s body. Observing the maneuver, the hostile force concentrated its fire on Staff Sergeant Morris’ three-man element and successfully wounded both men accompanying him. After assisting the two wounded men back to his forces’ lines, Staff Sergeant Morris charged forward into withering enemy fire with only his men’s suppressive fire as cover. While enemy machine gun emplacements continuously directed strafing fusillades against him, Staff Sergeant Morris destroyed the positions with hand grenades and continued his assault, ultimately eliminating four bunkers. Upon reaching the bunker nearest the fallen team commander, Staff Sergeant Morris repulsed the enemy, retrieved his comrade and began the arduous trek back to friendly lines. He was wounded three times as he struggled forward, but ultimately succeeded in returning his fallen comrade to a friendly position.

Staff Sergeant Morris’ extraordinary heroism and selflessness above and beyond the call of duty are in keeping with the highest traditions of military service and reflect great credit upon himself, his unit, and the United States Army.