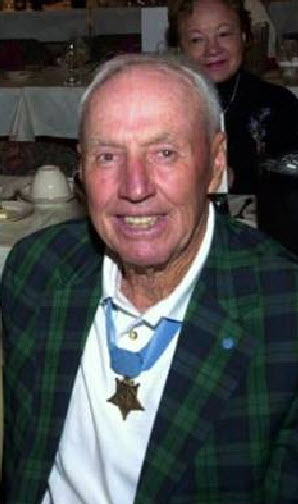 For conspicuous gallantry and intrepidity at the risk of his life above and beyond the call of duty as a rifle platoon commander of Company H, in action against enemy aggressor forces. With his platoon subjected to an intense mortar and artillery bombardment while preparing to assault a vitally important hill position on the main line of resistance which had been overrun by a numerically superior enemy force on the preceding night, 2d Lt. O’Brien leaped from his trench when the attack signal was given and, shouting for his men to follow, raced across an exposed saddle and up the enemy-held hill through a virtual hail of deadly small-arms, artillery, and mortar fire. Although shot through the arm and thrown to the ground by hostile automatic-weapons fire as he neared the well-entrenched enemy position, he bravely regained his feet, waved his men onward, and continued to spearhead the assault, pausing only long enough to go to the aid of a wounded marine. Encountering the enemy at close range, he proceeded to hurl handgrenades into the bunkers and, utilizing his carbine to best advantage in savage hand-to-hand combat, succeeded in killing at least 3 of the enemy. Struck down by the concussion of grenades on 3 occasions during the subsequent action, he steadfastly refused to be evacuated for medical treatment and continued to lead his platoon in the assault for a period of nearly 4 hours, repeatedly encouraging his men and maintaining superb direction of the unit. With the attack halted he set up a defense with his remaining forces to prepare for a counterattack, personally checking each position, attending to the wounded and expediting their evacuation. When a relief of the position was effected by another unit, he remained to cover the withdrawal and to assure that no wounded were left behind. By his exceptionally daring and forceful leadership in the face of overwhelming odds, 2d Lt. O’Brien served as a constant source of inspiration to all who observed him and was greatly instrumental in the recapture of a strategic position on the main line of resistance. His indomitable determination and valiant fighting spirit reflect the highest credit upon himself and enhance the finest traditions of the U.S. Naval Service.