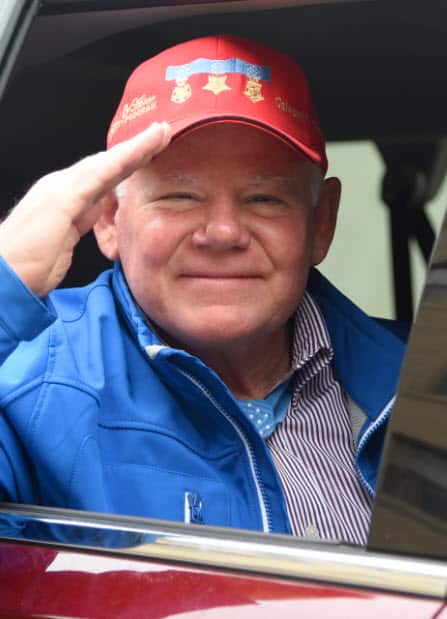 Sergeant Gary Michael Rose distinguished himself by acts of gallantry and intrepidity at the risk of his life above and beyond the call of duty while serving as a Special Forces Medic with a company sized exploitation force, 5th Special Forces Group, 1st Special Forces. Between 11 and 14 September 1970, Sergeant Rose’s company was continuously engaged by a well-armed and numerically superior hostile force deep in enemy-controlled territory. Enemy B-40 rockets and mortar rounds rained down while the adversary sprayed the area with small arms and machine gun fire, wounding many and forcing everyone to seek cover. Sergeant Rose, braving the hail of bullets, sprinted fifty meters to a wounded soldier’s side. He then used his own body to protect the casualty from further injury while treating his wounds. After stabilizing the casualty, Sergeant Rose carried him through the bullet-ridden combat zone to protective cover. As the enemy accelerated the attack, Sergeant Rose continuously exposed himself to intense fire as he fearlessly moved from casualty to casualty, administering life-saving aid. A B-40 rocket impacted just meters from Sergeant Rose, knocking him from his feet and injuring his head, hand, and foot. Ignoring his wounds, Sergeant Rose struggled to his feet and continued to render aid to the other injured soldiers. During an attempted medevac, Sergeant Rose again exposed himself to enemy fire as he attempted to hoist wounded personnel up to the hovering helicopter, which was unable to land due to unsuitable terrain. The medevac mission was aborted due to intense enemy fire and the helicopter crashed a few miles away due to the enemy fire sustained during the attempted extraction. Over the next two days, Sergeant Rose continued to expose himself to enemy fire in order to treat the wounded, estimated to be half of the company’s personnel. On September 14, during the company’s eventual helicopter extraction, the enemy launched a full-scale offensive. Sergeant Rose, after loading wounded personnel on the first set of extraction helicopters, returned to the outer perimeter under enemy fire, carrying friendly casualties and moving wounded personnel to more secure positions until they could be evacuated. He then returned to the perimeter to help repel the enemy until the final extraction helicopter arrived. As the final helicopter was loaded, the enemy began to overrun the company’s position, and the helicopter’s Marine door gunner was shot in the neck. Sergeant Rose instantly administered critical medical treatment onboard the helicopter, saving the Marine’s life. The helicopter carrying Sergeant Rose crashed several hundred meters from the evacuation point, further injuring Sergeant Rose and the personnel on board. Despite his numerous wounds from the past three days, Sergeant Rose continued to pull and carry unconscious and wounded personnel out of the burning wreckage and continued to administer aid to the wounded until another extraction helicopter arrived. Sergeant Rose’s extraordinary heroism and selflessness above and beyond the call of duty were critical to saving numerous lives over that four day time period. His actions are in keeping with the highest traditions of military service and reflect great credit upon himself, the 1st Special Forces, and the United States Army.