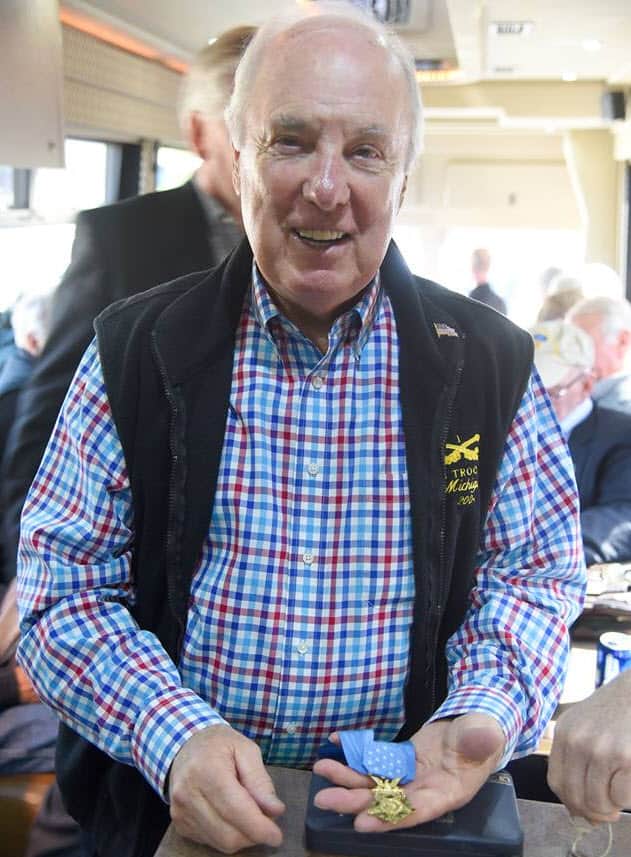 Capt. Taylor, Armor, was serving as executive officer of Troop B, 1st Squadron. His troop was engaged in an attack on a fortified position west of Que Son when it came under intense enemy recoilless rifle, mortar, and automatic weapons fire from an enemy strong point located immediately to its front. One armored cavalry assault vehicle was hit immediately by recoilless rifle fire and all 5 crewmembers were wounded. Aware that the stricken vehicle was in grave danger of exploding, Capt. Taylor rushed forward and personally extracted the wounded to safety despite the hail of enemy fire and exploding ammunition. Within minutes a second armored cavalry assault vehicle was hit by multiple recoilless rifle rounds. Despite the continuing intense enemy fire, Capt. Taylor moved forward on foot to rescue the wounded men from the burning vehicle and personally removed all the crewmen to the safety of a nearby dike. Moments later the vehicle exploded. As he was returning to his vehicle, a bursting mortar round painfully wounded Capt. Taylor, yet he valiantly returned to his vehicle to relocate the medical evacuation landing zone to an area closer to the front lines. As he was moving his vehicle, it came under machinegun fire from an enemy position not 50 yards away. Capt. Taylor engaged the position with his machinegun, killing the 3-man crew. Upon arrival at the new evacuation site, still another vehicle was struck. Once again Capt. Taylor rushed forward and pulled the wounded from the vehicle, loaded them aboard his vehicle, and returned them safely to the evacuation site. His actions of unsurpassed valor were a source of inspiration to his entire troop, contributed significantly to the success of the overall assault on the enemy position, and were directly responsible for saving the lives of a number of his fellow soldiers. His actions were in keeping with the highest traditions of the military profession and reflect great credit upon himself, his unit, and the U.S. Army.